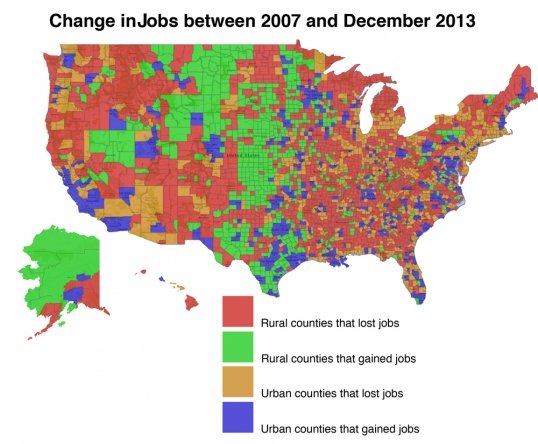 The Daily Yonder in a great online source for news on all things rural. Their recent weekly e-zine included an article on changes in jobs from 2007 through 2013. They include an interactive map to look at which counties are losing jobs and which are gaining.

There are obviously areas of the country that are adding jobs in rural areas around the county.  The Great Plains, from North Dakota down to Texas, is largely green, indicating that those counties gained jobs.  But, there are way too many blotches of red, indicating job losses since 2007.  A block of particular concern to me is the 33 counties in southern Illinois, with my hometown of Effingham sitting in the middle.  Anti-business policies are making it incredibly difficult for businesses to grow jobs.

Urban counties have recovered – and then some – from the job losses they suffered during the Great Recession. But in nonmetro America, there are 830,000 fewer jobs today than there were in 2007.

Unemployment in rural counties stayed stubbornly over 7 percent in December, according to employment figures released by the Bureau of Labor Statistics. The rural unemployment rate was, in fact, up slightly from November’s rate of 6.9 percent.

Unemployment rates in metro counties fell to 6.4 percent in December from 6.6 percent the month before. The rate in counties with small cities (between 10,000 and 50,000) fell to 6.7 percent from 6.8 percent in November.

These figures are not seasonally adjusted — and the changes are small — but this is a bit more evidence that the economic recovery in rural counties is lagging the rest of the country.

More troubling than the stalled month-to-month unemployment rate, however, is the fact that rural counties and counties with small towns still don’t have the jobs that existed before the recession began in December 2007, more than six years ago.

The story was not so happy in rural or small town counties.

Combined, the counties outside metropolitan regions had 830,000 fewer jobs in December 2013 than the average of 2007.

There was a shift in workforce over the last six years. (Workforce includes all those people either working or looking for jobs.) In the cities, the workforce increased by 2.7 million since 2007.

In rural and small town counties, however, the workforce declined by 486,000 people during this period. Rural counties that lost jobs outnumber those that gained jobs by more than two to one (1,376 to 595).