The following article includes a great visualization of how the economy of the United States compares to that of other countries. With the fear of a global recession, we will keep an eye on this chart over the next couple of years to see how it changes.

The World’s $86 Trillion Economy Visualized in One Chart 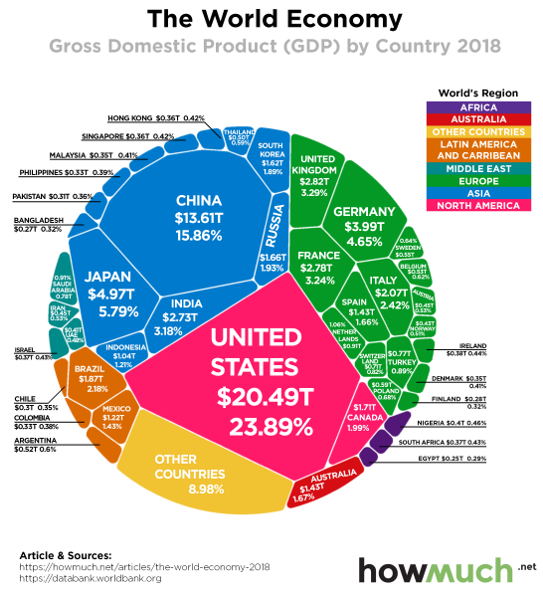 Our data comes from the World Bank’s 2018 global GDP figures. Each country is sized to the scale of its relative GDP. Countries are grouped and colored by region. For a look at how things have changed since 2017, check out HowMuch’s 2017 analysis of world GDP.

The World’s 10 Largest Economies by GDP

The United States and China together make up nearly 40% of the global economic GDP at $20.5 and $13.6 trillion, respectively, contributing that’s 23.9% and 15.9% to the global economy. Due to their prominence and their growing tensions, our analysis focuses on these two countries.

About half of the 280 business economists polled by the National Association for Business Economics said they expect a downturn in the United States economy by the end of next year, and analysts at both Goldman Sachs and J.P. Morgan see growth slowing to below 2 percent in the second half of 2019. What’s the reason for the expected downturn? Economists point to a number of factors for the expected slower growth. The job market, which has thrived in this economy, is still hot but has signs of slowing. Expected interest rate hikes from the Fed are also at play. There’s also the factor of growing economic inequality in the U.S. — the bottom half of Americans lost $900 billion in wealth between 1989 and 2018 — and its impact on overall economic well-being.

But the factor making the most headlines is the impact of tariffs and the possibility of a trade war between China and the U.S. The number two economy is already feeling the impact: China’s GDP growth in the second quarter slowed to 6.2%, the smallest gain since 1992. The country’s industrial output growth slowed to 4.8% in July from a year earlier, the weakest pace since February 2002. It’s uncertain that the United States and China will overcome their trade differences anytime soon, and the markets seem to suggest a long-term impasse. Despite these signs of gloom, some economists aren’t so sure that decline is inevitable, citing decades-long periods of stable growth in countries like Australia and the UK.