Interesting, though not surprising, map of manufacturing job losses and gains. We are seeing this in our own business. 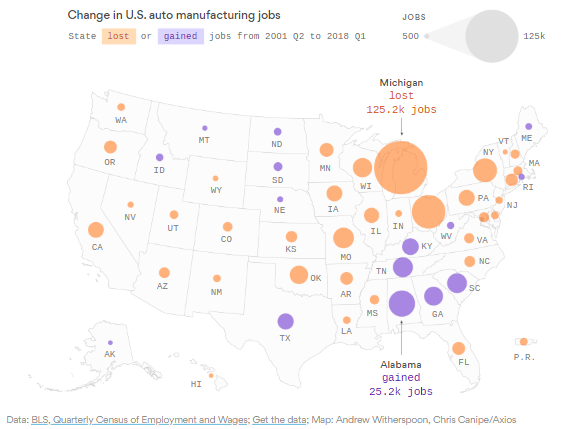 The bottom line: Michigan had the most jobs to lose, and automakers are increasingly attracted to states where workers are less unionized and wages are lower.

Automakers “don’t want to compete for workers” and want to be the employer of choice for manufacturing jobs, the Center for Automotive Research’s Kristin Dziczek told Axios. And they don’t have to compete as much in southern states, where their nearest rival might be hundreds of miles away.

By the numbers: Since the auto industry’s most recent labor peak in the early 2000s — the only time frame for which complete state data was available — 15 states saw auto manufacturing job growth. Six of them were in the south.

Yes, but: The South is not the only region where foreign automakers operate.

What’s next: One automaker is going against the trend. Fiat Chrysler said it plans to open a new factory in Detroit, the first new U.S. plant by a domestic carmaker in a decade, which could add at least 1,800 jobs in Michigan.