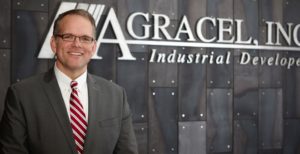 Brian Nash, Vice President of Development for Agracel’s Southeast office in Spartanburg, South Carolina, was recently chosen to lead the South Carolina Economic Developers’ Association (SCEDA) for 2017-2018. Brian has served on the Board of SCEDA since 2012 where he most recently served as their Vice President before being appointed as President.

Agracel opened its Southeast office in 2011. Since that time, that office has developed 13 projects totaling in excess of 1 million square feet and valued over $75 million. Brian joined our team in 2015.

Brian earned a Bachelor of Arts degree in Business Economics from Wofford College in 1999 and has worked in industrial/economic development since 2002. Brian and his wife, Jaime, along with their two children, live in Woodruff, South Carolina.