We have been reviewing a new (to us) economic indicator, the Chemical Activity Barometer. The article below explains more about this tool, and why those of us involved with manufacturing might be interested in following.

For almost 100 years, The American Chemistry Council has been publishing their “Chemical Activity Barometer.” The index rose 3% in the year ending a few days ago, and reached a new all-time high in the process. As the charts below show, this index has reliably tracked the performance of the overall economy and, in particular, it has been a good leading indicator of industrial production, which has been noticeably weak for the past 18 months. 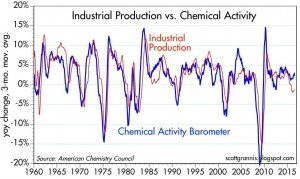 To be conservative, the strength in the Chemical Activity Index suggests that at the very least, a recession is not on the near-term horizon, and that the economy should prove to be at least a bit stronger, in the months to come, than the market is expecting.