#56 – Inside Our Industry – Top Cities Where U.S. Manufacturing Is Thriving

Manufacturing has served an important role in the U.S. economy, and the industry continues to play a critical role today. From industrial products to consumer goods, and from automobiles to aircraft, the U.S. manufacturing sector is diverse and continues to develop and evolve. In this deep dive into manufacturing-centric areas in the U.S., we examined the question: where are the top cities in the United States where manufacturing is thriving?

Top Cities Where Manufacturing Is Thriving by City Size

The majority of the top cities for manufacturing in our study—43 in the top 50, and 9 in the top 10—were small and midsize cities. Small cities with a powerful hold on significant manufacturing industries dominated our list, and Indiana, with 3 out of the top 10 spots, had a particularly strong showing at the top of our ranking.

We segmented cities by metropolitan statistical area population, with small (<150,000 population), midsize (population between 150,000 and 500,000), and large (over 500,000 population) cities. Below are the top 10 small, midsize, and large cities where manufacturing is booming. 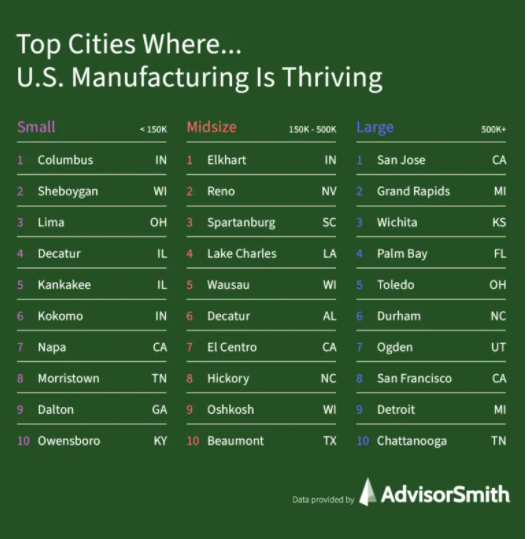 Top Cities Where Manufacturing is Thriving

Elkhart, Indiana, was the top manufacturing city in our study, and one of two midsize cities in the top five. Elkhart is a city in northern Indiana just fifteen miles east of South Bend, the economic and cultural center of Northern Indiana. Elkhart and the surrounding cities in Elkhart County are referred to as the “RV capital of the world.” Fifty-two percent of all RVs produced in the United States are produced in Elkhart County.

Columbus is a small city in central Indiana located approximately 40 miles south of the state capital, Indianapolis. Columbus is one of the biggest manufacturing cities in the nation, as 38% of the people who work in Columbus work in the manufacturing industry. Columbus is particularly well known as a producer of automotive engines, and this is, in no small part, due to the city serving as the headquarters of Cummins, a Fortune 500 corporation that designs, manufactures, and distributes engines. Columbus is also home to Toyota Material Handling, U.S.A., Inc., which is the world’s largest manufacturer of forklifts.

Reno is a city in the northwestern part of Nevada, located near the California border. The city is best known for casinos and tourism, serving both the gaming industry and the nearby ski resorts of Lake Tahoe. Recently, the Reno economy has attracted major investments from technology companies based in California and Washington, such as Amazon and Google. Most importantly for the manufacturing industry is the location of the Tesla gigafactory in Reno. This electric vehicle battery manufacturing plant has led to rapid growth in manufacturing output and manufacturing jobs in Reno.