We are always looking for good news stories for the manufacturing industry. This week’s Agurban shares an article from Market Watch that looks at reshoring.

Made in the U.S.A. is hot again, and the number of manufacturing jobs that are returning to the U.S. — or coming to the U.S. for the first time — from overseas has hit a record level. 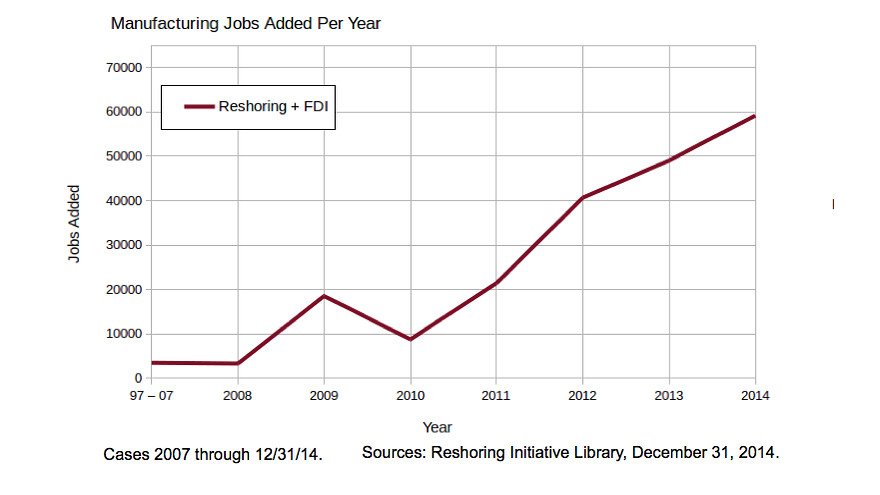 Sixty thousand manufacturing jobs were added in the U.S. in 2014, versus 12,000 in 2003, either through so-called reshoring, in which American companies bring jobs back to the U.S., or foreign direct investment, in which foreign companies move production to the U.S., according to a study from the Reshoring Initiative. In contrast, as many as 50,000 jobs were “offshored” last year, a decline from about 150,000 in 2003.

Why is this significant? 2014’s net increase of at least 10,000 jobs was the first net gain in at least 20 years, Harry Moser, the Reshoring Initiative’s founder and president, told MarketWatch. “The trend in manufacturing in the U.S. is to source domestically,” Moser said. “With 3 [million] to 4 million manufacturing jobs still offshore, we see huge potential for even more growth.”

One big catalyst behind the trend: Escalating wages in traditionally lower-cost countries, including China, have pushed companies to reconsider sourcing strategies. 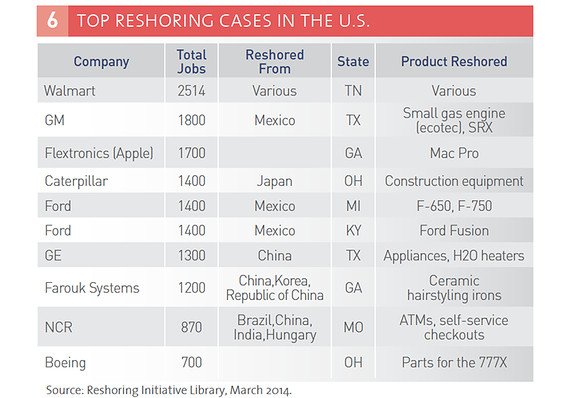 To meet consumer demand, companies increasingly want to make products closer to where their customers are and react to trends and ship faster. Additionally, there are shipping costs and import duties to contend with when a company manufactures the products that it intends to sell into the U.S. market overseas. Meanwhile, such variables as environmental issues, product-quality scandals, and incidents like the 2013 Bangladesh garment-factory collapse or this year’s West Coast port slowdown have made domestic production more appealing. Government incentives and a relatively skilled U.S. workforce are also among top factors.

In fact, among the world’s top 10 export economies, the U.S. last year ranked No. 2 — behind only China — for cost competitiveness, according to the Boston Consulting Group, with real estate and natural gas and other energy prices tending to apply downward cost pressure in the U.S.

CEO Jeff Immelt of GE has said the U.S., on a relative basis, has never been more competitive. For instance, he’s said it takes three hours or less to make a refrigerator, so the total cost can be lower to have it made domestically versus in China or Mexico when factoring in other costs including transportation.

For the full article, visit here.