The National Association of Manufacturers (NAM), along with Industry Week, conduct a quarterly survey to gauge the optimism of the nation’s manufacturers.  They have released their most recent findings.

In their 4th Quarter 2014 pole, 91.2% of respondents were either somewhat or very positive in their own company’s outlook (see chart below). This continues an upward trend that began in the first quarter of 2013, and it was only the fourth time since the survey began in 1997 that the outlook measure has been 91% or better. The last time was in the fourth quarter of 2005. Parsing this data out by firm size, larger manufacturers (i.e., those with 500 or more employees) were the most positive, with slightly more than one-quarter saying they were very positive; in contrast, only 18.8% of the smallest manufacturing firms (i.e., those with fewer than 50 employees) were very positive. 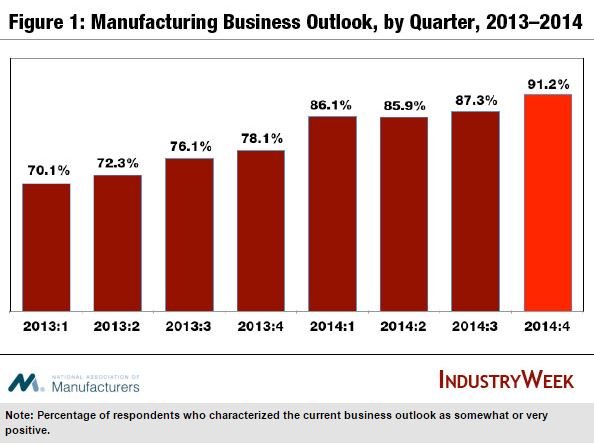 Stronger sales expectations supported the better outlook in the fourth quarter. Manufacturers predict sales to grow 4.5% on average over the next four months, up from 4.1% in June and 4.4% in September. This marks the fastest pace since the first quarter of 2012.

Manufacturers also expect to hire more workers in the next year. Firms plan to increase their employee levels by 2.1% on average over the next 12 months, up from 0.9% one year ago and 1.9% in the last survey. This marks the fastest pace in more than three years (second quarter of 2011). Half of those taking the survey responded that they see positive gains in employment over the next year, up from 46.0% in September. Still, 45.6% do not plan to make any employment changes.

The survey looks at a number of other issues facing manufacturers. You will find the entire article here.

We at Agracel are excited to see that, for the most part, manufacturers are optimistic as they move into 2015.