#488. If US Manufacturing Hasn’t Declined…

We love this piece from Forbes! We have always tracked productivity. While we would like to see manufacturing employment increase, a lot, we understand that productivity gains are key to remaining competitive in this industry!

One of the economic tales of our times that continually puzzles is me is the amount of effort that’s put into first describing and then providing causes for the decline of American manufacturing. The reason this puzzles me is because as far as anyone can tell there hasn’t been a decline in American manufacturing. Far from it, output is at all-time highs.

It is absolutely true that manufacturing as a percentage of the US economy has fallen. But that’s not because manufacturing itself has shrunk, that’s because other parts of the economy, most obviously services, have grown faster than manufacturing. It is also true that manufacturing employment has dropped precipitately. But to decry that while production is still rising is to be most foolish. For having rising output combined with falling employment is generally regarded as a good thing. Labor, workers, are a cost of making something. An input into the system. And if we get more out of the system while putting fewer resources into it then this means that our system is becoming more productive. And another name for the system becoming more productive is that we’re all getting richer. For whatever limited resources we have available to us we’re getting more things that people can drop on their feet: we’re getting richer.

The piece that puzzles me today is this over at Brad Delong’s: “The contribution of this decades-long trend to the rapid decline in American manufacturing has not been fully acknowledged.”

The details of the research being outlined are most interesting (well, to those of us of a wonkish persuasion perhaps) but don’t particularly concern my point here. That point being that there has been no rapid decline in American manufacturing so looking for contributions to such a decline is rather an odd thing to be doing. It might well be true that American finance and shareholder short-termism (parts of the subject of this research) have changed American manufacturing: but without a decline they cannot be said to have contributed to a decline that has not happened.

Here’s the Index of Industrial Production: 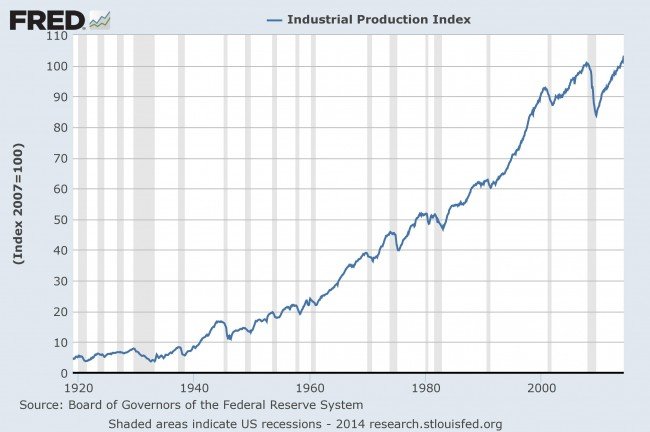 As you can see the value of industrial (which is akin to, but not exactly the same as, manufacturing output) has been on a century long tear. And yes, there was a substantial collapse during the recent recession but output is already above the peak reached in 2007.

BTW, given that this is an index, yes, of course it is inflation adjusted. And yes, it’s also true that we are always only concerned with the value of output, not the tonnage or number of pieces.