Our final trend, a 2-parter, in our series about what excites us about the future for Agracel is a familiar topic in our Agurban:  energy.

It is unlikely that the trends discussed would have occurred in the magnitude that they have if it weren’t for the incredible energy revolution that is ongoing in this country. Many of the new manufacturing plants being built today are directly related to the much lower American energy prices and are the leading driver of an ongoing manufacturing renaissance.

“The Great American Energy Boom” might qualify as the most important economic story of the past decade. It is the energy equivalent of the Berlin Wall coming down, an event that changed the economic and political landscape for over a decade.

Back only five years ago, in July 2008, natural gas prices were at an astounding high of $13.58/Mbtu and the talk was of the critical and chronic shortages that would push prices even higher and potentially cripple the American economy. NOBODY could have predicted that natural gas prices would fall by two thirds by the end of 2013. At the same time, U. S. crude oil production was only 5 million barrels per day (bpd) and NOBODY would have predicted, even in their wildest dreams that crude production would increase by 60% during the same time period. Or, that this revolution would push total CO2 emissions to a 19-year low and a 50-year low for per-capita emissions.

This energy revolution is due to the amazing “petropreneurs” who through grit, persistence, and determination “unlocked the code” to tap into the energy treasures trapped in shale rock formations miles below the Earth’s surface. As a result, you can take all of the books on “peak oil” and throw them in the trash. Peak oil, the  concept that oil production would fall precipitously, missed an important piece of the puzzle in their analysis: human ingenuity and drive coupled with the accelerating nature of transformational technology which allows a driller to bore down 2 miles and then out another 2 miles, hitting a target the size of a truck tire. These new developments have pushed peak oil decades if not centuries into the future.

Last year’s oil output of 7.5 million bpd also allowed the USA to achieve 90% “energy self-sufficiency” in May 2013, something we hadn’t done since September 1987. When you look at the combination of oil and gas production on an energy equivalent basis, the USA passed Russia in 2013, producing the equivalent of 25 million bpd to Russia’s 22 million bpd. Saudi Arabia has fallen to third place at 14 million bpd.

While most of the activity to date has occurred in only four plays, the Eagle Ford and Permian Basins in Texas, the Bakken in North Dakota, and the Marcellus in Pennsylvania, there are numerous other locations in the USA that have these same-type of shale formations. The Big Four energy plays account for 10,793 of the 18,580 horizontal wells drilled to date in the USA. The fields in TX and ND accounted for 80% of the increase in oil production in 2013. Their three super-elite giant oil fields each passed 1 million bpd in the past three years, something that only 7 other fields in the world have ever done.

While more is generally written about oil production, it is natural gas that is the “game changer” for American manufacturing, as it is a commodity that is much more difficult and expensive to transport than crude oil. The  huge increases in natural gas production from the Marcellus, Permian, and other plays has driven the price of natural gas to unprecedented levels when compared to its energy equivalent value to that of oil. A barrel of oil has 5.8 times more energy than one million cubic feet of natural gas (mcf). At the end of 2013 spot natural gas was priced at $4.31/Mbtu at the Henry Hub, or the energy equivalent to $25/barrel of oil. 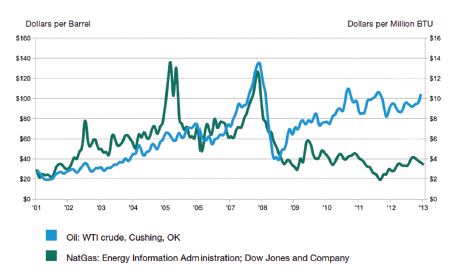 This wide energy equivalent differential will result in a move from oil production to natural gas. Trucks running on compressed natural gas (CNG) instead of diesel is one of dozens of such changes in the future. The relatively low price of natural gas has resulted in a slowdown in new drilling for natural gas from around 1,000 rigs in 2008 to only 300 in 2013. However, if prices stay above $4/Mbtu, a level hit in late 2013, it is likely there will be a new surge in natural gas drilling and production.

One of the very important lessons from this shale revolution is that virtually all of the early development and expansion was accomplished by smaller independents. Big Oil, the Exxons, BPs, Shells, etc., were more focused upon finding highly concentrated accumulations of oil and gas around the world, drilling a small   number of highly productive holes. They were looking for the “needle in the haystack”, using highly sophisticated seismic and other surveys to improve their odds of drilling a successful hole. They literally overlooked the idea of shale oil and gas and were late to the game.

Next week, we will conclude our series on the Trends Exciting Us at Agracel, with Part II of Trend 5: Growing Economic Impact of Low American Energy Prices.