This week, we are looking at the longer term impact of manufacturing returning to the USA, as we continue to explore trends that excite us about our future.

The trend of manufacturing firms moving production from Europe and China to the USA is in the early stages. We’d put it in the first or second inning. The type of firms making these moves will change over time, occurring where the basic building blocks of industrial production are produced most economically.

Shale gas, and to a lesser extent shale oil, is changing the industrial landscape in a rapid manner. The McKinsey Global Institute estimates that between now and 2020 the shale oil and gas industry will add $380 to $690 billion, or two to four percentage points, to America’s annual GDP, creating 1.7 million permanent jobs in the process. IHS, another research group, talks of a Manufacturing Renaissance and predicts a $533 billion boost to GDP by 2025, creating around 3.9 million jobs.

We see these changes to the manufacturing landscape occurring in three stages:

Phase 1 (started in 2010): Emphasis on Gas & Power-Intensive Industries like steel, fertilizer, methane, and other petrochemical feedstocks. Since 2011, 128 new energy-hungry industrial plants have been announced in the Gulf Coast region alone, with a combined value of $114 billion. In the Midwest, projects like OCI’s $1.4 billion Wever, IA fertilizer plant (slated to start production in 2015) is the first world scale such plant built in the USA in over 25 years. These new projects are estimated to increase output by $81 billion/year and to create 637,000 new permanent jobs by 2023.

Phase 2 (starting in 2016): Downstream products like resins and chemicals increase in importance. Ethane production, the “building block of manufacturing” for products like plastics, resins, and packaging, surges with prices falling. Over 60 announcements have been made to upgrade existing or construct new chemical derivative plants over the next 5 to 6 years with a total investment in the range of from $80 to $100 billion.

Phase 3 (starting in 2019): Manufacturing driven by lower raw material costs starts to take off. This is where

Agracel will have its largest number of potential clients and projects and bodes well for us in the next decade.

Raw materials normally account for 60% to 70% of manufacturing cost of goods sold with labor at around 20% for most manufacturers. Where to manufacture very basic industrial products is won or lost around these cost differentials. Shale gas is already giving the USA a huge advantage for steel, plastics, and chemicals, with other industries on the cusp of similar advantages. However, it will take 5+ years for these advantages to flow through the supply chain, with most bottlenecks relieved by 2017. While shale gas is the game changer with these inputs, shale oil is “icing on the cake” for basic industry.

We found numerous research reports which highlighted both what has happened to date on these changes in the manufacturing landscape and which predict what will occur over the next decade. Here are a few.

A December, 2013 Joint Economic Report from the U. S. Congress had these highlights:

• Manufacturing added jobs in 37 of the past 48 months, approximately 12,000 jobs/month on average.
• Manufacturing exports of $1.2 trillion in 2013 are up 38% since 2009 and above the pre-recession levels. This is a new record level of exports.
• The USA exports 25% of what it manufacturers. These exports account for 3 million manufacturing jobs.
• There is currently a shortage of 600,000 high-skilled manufacturing employees in the USA.
• The American manufacturing workforce is rapidly aging, more than any other sector in the country. Over half of this workforce is over 45 years of age.
• Beginning in 2008, for the first time ever, the share of workers with post-secondary education surpassed those with a high school education or less. By 2012 the ratio was 55%:45%.

The Boston Consulting Group (BCG) added these points in an August 2013 report on American manufacturing:

• American exports have grown at more than seven times as fast as GDP since 2005
• As the share of the American economy, exports are at the highest point in over 50 years
• But, the trend is only starting and by 2020 the USA will capture $70 to $115 billion in annual exports
• By 2020 the combination of this export growth and the reshoring of manufacturing to the USA will add 2.5 to 5.0 million factory jobs

A McKinsey Quarterly study from January 2014 showed 6 industries dominating the American industrial rebound since 2010, with them representing 94% of the total rebound. They are:

Another item of note from the study is that more than two-thirds of global manufacturing activity takes place in industries that tend to locate close to demand.

A NAIOP June 2013 study of “Stabilization of the U. S. Manufacturing Sector and its Impact on Industrial Space” showed the following industries most likely to grow in the next seven years (through 2020):

Industries expected to decrease include: computer and electronic products; chemical products; apparel; electrical products; and textiles. We have no space leased to firms in these declining industries. However, the two leading industries that are projected to expand, fabricated metal and plastics, are our largest concentrations, each with 28% and 19% respectively of our total leases.

This same study showed that the sf/employee ranged from 429 sf for computers to 1,558 sf for furniture. An annual study of our clients shows 8,216 people working in our buildings at the end of 2013. With 6.4 million sf leased, this is an average of 781 sf/employee. During the last five years we’ve doubled the number of workers in our buildings. 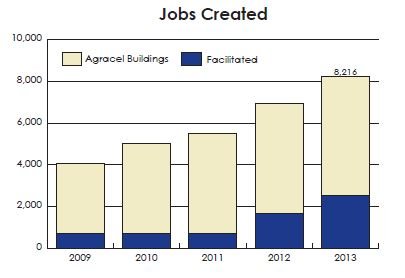 Next week we will look at one our country’s oldest professions…yes, agriculture, and how the evolution of the farming and agriculture industry mirrors that of industrial manufacturing.