Too often towns and regions get complacent with what they are doing to create new jobs and opportunities, especially after a long run of successes.  Sitting in place and figuring that they will just coast along, is a long term recipe for decline and ultimate failure.

I’ve always felt very good about my hometown and county (both named Effingham) when I’ve compared it to other places around the USA.  We’ve had a number of great successes with both attracting in new businesses and also with growing some that were birthed here.  In fact Site Selection magazine named us the 6th best town in America with creating new jobs a couple of years ago.  But, that is in the past.  What are we doing for the future?

A new book and website, “How Money Walks” (www.howmoneywalks.com), sent the alarm bells off for me as I studied the data.  Travis H. Brown, the author, looked at how people have moved around the country, county-by-county, tracking adjusted gross income (AGI) for individuals.  His research, covering the period from 1995 to 2010, was derived from IRS data for that period. 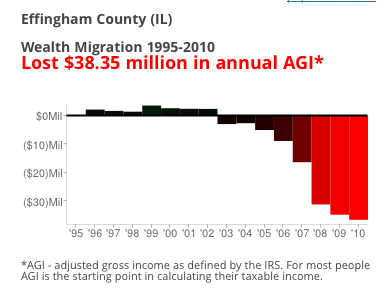 There are four other towns that I’ve always considered to be very similar Illinois towns, Rochelle, Peru, Mt. Vernon and Marion.  Each is a “stand-alone” town that is somewhat of a regional center, has two interstates and multiple rail lines.  Each has also seen some good growth over the last 25 years that I’ve spent studying small towns around the country.

We don’t know what has happened since 2010. Hopefully the slide has been reversed. Those communities with negative wealth migration run the risk of falling further behind and slowing aging in place. Remember Key 7 ½ – Embrace the Teeter-Totter Factor? A little effort can bring you to the top!