The state of Michigan took a beating during the Great Recession. We are happy to see the positive manufacturing news continue for them.

(The most recent) jobs report reinforces the slow yet steady recovery of the auto industry. Since 2009 when auto manufacturing jobs bottomed out at just over 600,000 jobs, the sector has seen steady improvement: back above 900,000 jobs for the past two years and at 946,300 in April, according to today’s report.

But for a happy story about manufacturing, look no further than Michigan.

The year 2009 was a very tough year for Michigan. Unemployment rose to near 14 percent in the state, as it succumbed to the one-two punch of an already-struggling auto manufacturing industry and then the Great Recession.

Yet despite its heavy reliance on the tumultuous auto industry, employment in Michigan has recovered better than in the country as a whole. From 2009 to 2016, total jobs there grew by 12 percent compared to 10 percent nationally. And in the overall manufacturing sector, job growth has skyrocketed in Michigan, rising by nearly 32 percent compared with just over 4 percent nationally.

In fact, from 2009 to 2016, manufacturing boasted almost one of every three new Michigan jobs. Some of that (nearly one out of every eight new Michigan jobs) occurred within the auto industry — it turns out mostly in auto parts manufacturing than in the assembly of the cars. Not a surprise given the high technological sophistication of automotive instrumentation these days.

As a result of the employment recovery in Michigan, the unemployment rate dropped to 5 percent in 2016 — the lowest rate since 2000, and one of the lowest ever.

So what accounts for the Michigan miracle?

One potential explanation: in the years following the Great Recession, Michigan had an unusually large number of available workers with particularly high skills and experience in manufacturing. That uniquely talented workforce, well versed in adapting to the latest technological advances, may have encouraged some businesses to employ a larger share of their workers in Michigan. And many of the skills and experiences that people acquire working in the auto industry can transfer to other forms of manufacturing.

The high-skilled nature of manufacturing jobs in Michigan also makes them less likely candidates for automation or offshoring. Neither a machine nor cheaper foreign labor can adequately substitute for the talent of a Michigan worker.

FOOTNOTE:  As a footnote to this article, we would like to include a graph from the Chicago Fed that presents evidence that Detroit’s economy, along with Michigan’s, is doing noticeably better since the Great Recession. 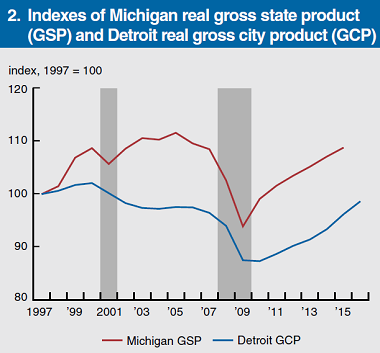 As you may recall, the city of Detroit filed for bankruptcy in July 2013. Prior to emerging from bankruptcy in December 2014, the city was already experiencing increased investment, higher employment, less unemployment, rising incomes, and improving real estate values. The city’s economy has been improving since emerging from bankruptcy and has come a long way in just a few years. As always, there remains room for improvement.