#31 – Inside Our Industry – The Big Moves: Where People Are Moving

Every year new reports are released on which states people are moving from and to. No real surprises once again, as New York, California and Illinois top the list…

For decades, New York has been the leading exporter of people to other states, though has been severely challenged since 2000 by California. During five years around the housing bust, more net domestic migrants left California than New York. Then, for a time, California’s annual losses were not quite as severe, but were restored to the largest loss in 2019, according to Census Bureau estimates.

The four largest losing states (New York, California, Illinois and New Jersey) are large, ranking first, fourth, sixth and 11th in population. Even so, their net domestic outmigration rates all rank in the top ten (Figure 1). 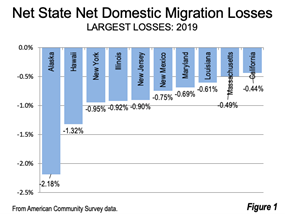 Leaving California: The largest interstate move in 2019 was from California to Texas, with a net migration of 45,200 residents. California also sent a net 31,500 residents to Arizona, the third largest loss, 20,900 to Nevada, the sixth largest loss and 20,700 to Oregon, the eighth largest loss. Interestingly, the three of the four largest number of leavers went to the states that border California, while the largest number was attracted by Texas, with its major metropolitan areas more than 1,000 miles away.

The most likely driver of this migration is California’s high cost of living. Each of the recipient states have a lower cost of living than California, with its excessively high housing costs and high taxes. Not surprisingly, better housing affordability (lower house prices relative to incomes) is strongly related to net domestic migration (Figure 2). Housing costs represent more than 85% of the cost of living difference between higher cost metropolitan areas (like in California) and the national average (Figure 3) and housing affordability is strongly related to net domestic migration. Moreover, Arizona also has an advantage with its strong attraction to retirees.