#127 – Inside Our Industry – South’s Population Growth Can Create Prosperity

Not surprising to most of us, the “south’s” population growth has outpaced other regions of the country. Following is the introduction to a great article that appeared on The Daily Yonder that looks at these growing communities and how they can create inclusive and sustainable economic development. 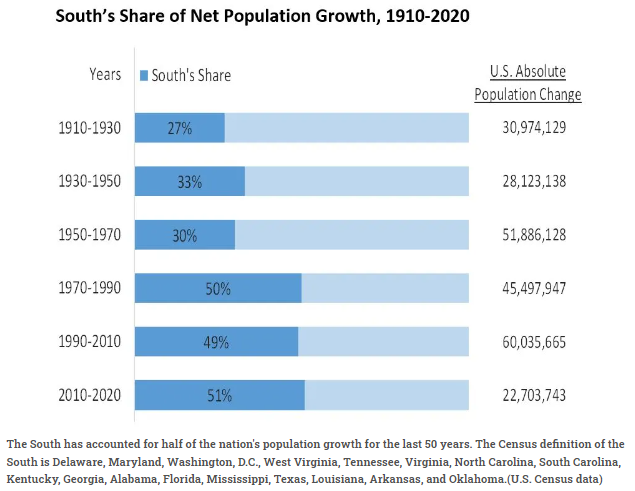 In North Carolina, state commerce officials have successfully recruited six major firms that will create an estimated 18,000 new jobs by 2030, earning North Carolina the reputation as the best place in the country to do business.  Other Southern states placed in the ranking, including Virginia in third, Texas and Tennessee, fifth and sixth respectively, Georgia at number 10, followed by Florida at number 11.

The South has been attracting the largest share of net population growth in the U.S. over the past five decades.

The South is the dominant region for population gain from all regions of the country, with the Western region lagging much further behind, using the latest data from the Census Bureau, April 1, 2020 – July 1, 2021. Significant increases occurred due to increased migration patterns during Covid-19 outbreaks, when pandemic refugees left the larger cities in the Northeast to spread out in the more rural South.

Click here for the rest of the article that includes additional maps and charts, and what local governments can do to develop entrepreneurship and their small business ecosystem in terms of both diversity and equitability.