Last year, we ran a series of Agurbans on “What Excites Us About the Future for Agracel”. We are updating that list for 2014. We have included this list in our Annual Report, and we will run this series over the next few weeks in our Agurban as we discuss a number of multi-decade trends that we feel will have a dramatic impact upon the demand for our specialty, that of manufacturing space. Most of these trends revolve around technology, global logistics, and international politics. These trends continued to grow in importance during the year, with several just starting to have an impact upon American manufacturing. Our 2014 Trends include: 1) European Manufacturing Firms Moving to USA;  2) Reshoring Manufacturing to the USA;  3) Longer Term Impact for American Manufacturing;  4) The American Agricultural Juggernaut—Similarities to American Manufacturing; 5) 3D Printing Brings Production Closer to Consumption;  6) Growing Economic Impact of Low American Energy Prices, Part I and II.

Agracel has seen a dramatic increase in the number of projects in our pipeline that involve foreign manufacturers, especially European firms, many of which are looking at establishing their first American beachhead. During the past year we did an expansion for a French-Japanese auto parts joint venture in Scottsboro, AL; sold a building to an Italian agricultural equipment manufacturer in DeWitt, IA; and leased a building to a French tire manufacturer in Greer, SC. At the end of 2013 we were working with prospects from Germany, Netherlands, France, and Italy.

From our perspective it appears that this movement of European firms to American soil is in its infancy and will continue for some time. It is driven by how poorly their economy has recovered from the Great Recession, exasperatingly complex and costly regulations, and the increasingly wide disparity between energy and electricity costs in Europe and the USA.

The industrial economy in Europe mirrors that of their general economy. The graph below shows how European and American industrial production moved closely together….until 2011. In that year, while U. S. production continued to climb from the low it hit in 2009, the Eurozone topped out and slipped again.

The Fraser Institute, a leading Canadian think tank, ranks the USA as the world’s third-most-favorable economy in terms of labor regulations. This compares to Japan and the UK at 14 and 15, respectively; Italy at 72; France at 94; and Germany at 112. In Germany the cost to shutter a 200-worker plant is approximately $8 million in special labor costs alone, and is a major inhibitor for someone to build a new, innovative plant that has any degree of risk.

The cost differential between European and American energy costs continues to diverge. And, it appears that this cost differential will continue to grow, especially with natural gas, putting European heavy industry at a significant cost disadvantage. One option for Europe or other high cost energy consumers is to import natural gas via LNG ships from places like the USA. However, the cost of doing so is expensive, adding about $6/Mbtu to its cost, a significant cost disadvantage for locations which are importing.

Hans-Ulrich Engel, CEO of BASF North America, said this about American manufacturing, “At this point in time, the overall framework—if you consider all the factors including economic growth, the cost of raw materials, and the cost of energy—is more favorable in the U. S. than in some European countries.”

Lakshmi Mittal, chairman and CEO of the steel group ArcelorMittal, wrote in a Financial Times op-ed piece in

January 2014 that Europe’s growing energy gap was jeopardizing his and other energy-intensive industries’ economic viability. He added, “If we paid US energy prices at our EU facilities, our costs would drop by more than $1 billion a year.” 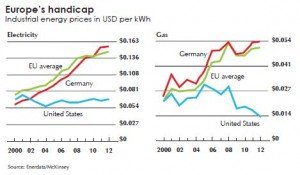 Next week, we will look at Reshoring Manufacturing to the USA, a topic we have reported on before in this ezine. We expect reshoring to remain a driving force to increasing manufacturing in the U.S.